What methodology developed for the evaluation of the RNQP status?

The methodology developed during the RNQP Project is based on a quick evaluation process. This uses a decision tree with one qualification question and elimination questions. A compilation of the answers to these questions was achieved within a Matrix. In the context of the RNQP project, the assessment area was the European Union. 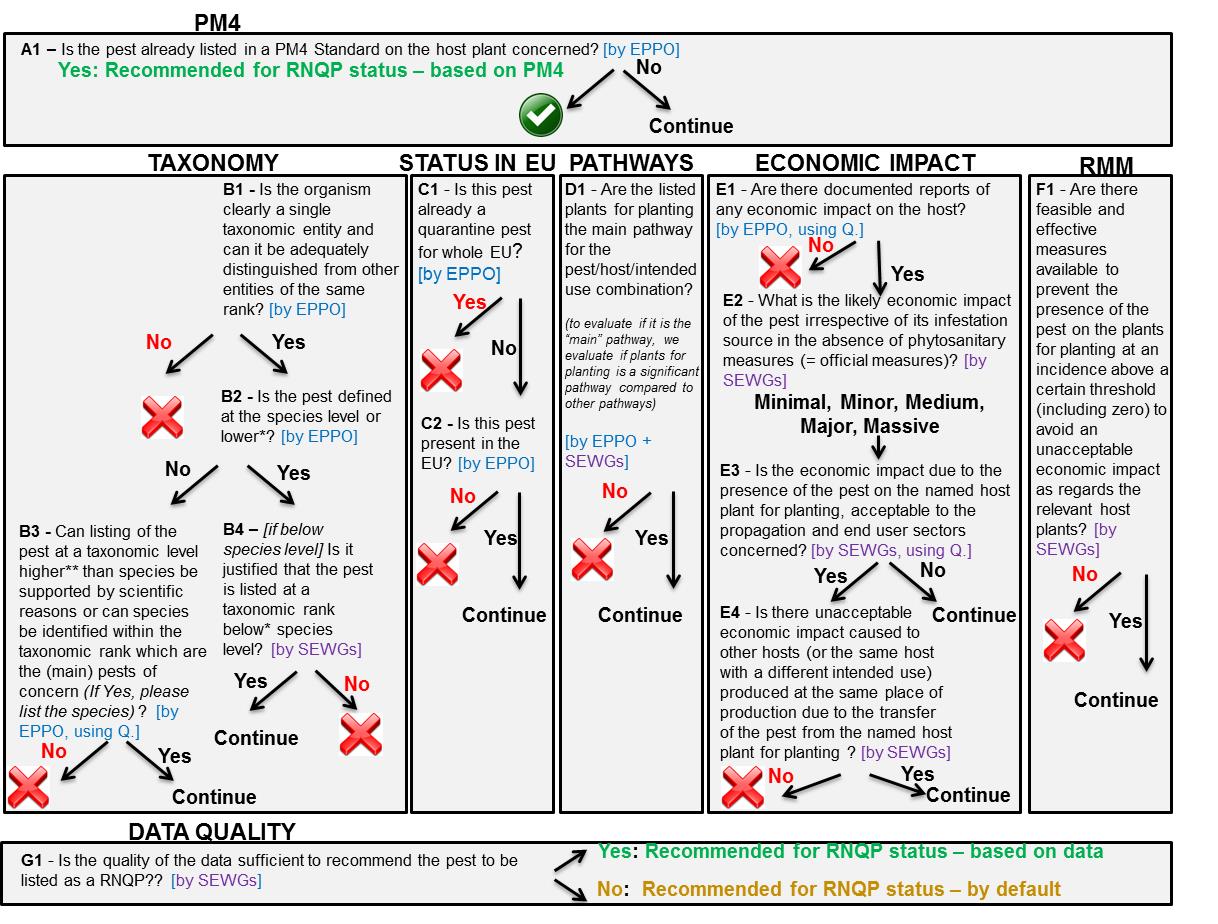 Know more about the developed methodology

1/ Initiation: listing and naming of candidate pests and host plants to which the methodology was applied, including resolution of current taxonomic status [mainly done by EPPO Secretariat];

2/ Categorisation: elimination of those pests which do not fulfil the essential criteria for RNQP status [done by EPPO Secretariat based on scientific data and literature, supplemented by questionnaire responses and then validated and/or completed by Sector Expert Working Groups];

3/ Assessment: finalisation of the evaluation to recommend a list of RNQP [based on scientific data, literature, and/or practical expertise within Sector Expert Working Groups].

The level of analysis and justification required for each pest/host combination was decided based on questionnaire responses.

The proposed methodology, before being finalized, was tested on 13 entries (21 pests), mainly coming from Annex II.A.2. of Council Directive 2000/29/EC and submitted by the IIA2 AWG as candidates for the RNQP status.

Concerning economic analysis, this methodology mainly focus on collating information available from National Plant Protection Organizations and stakeholders, supplemented by a literature search approach, using data available in scientific publications and other documents (grey literature). This data was reviewed and refined by experts. 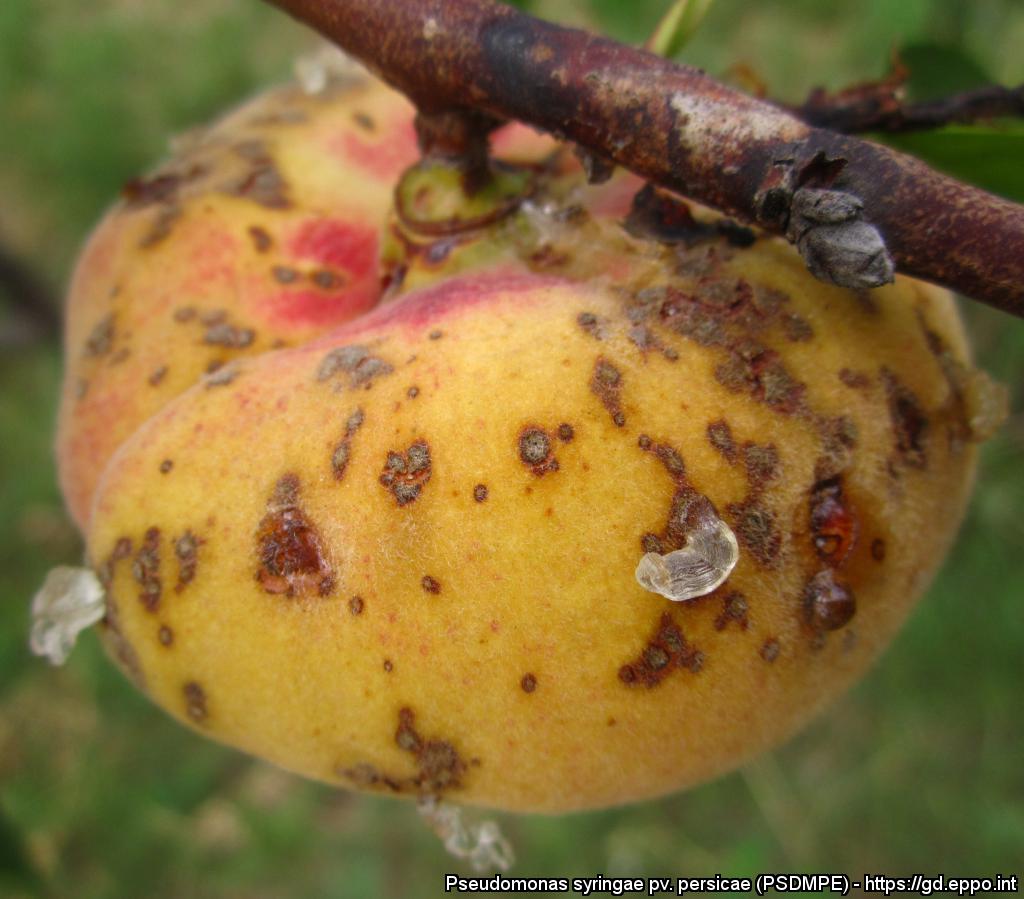 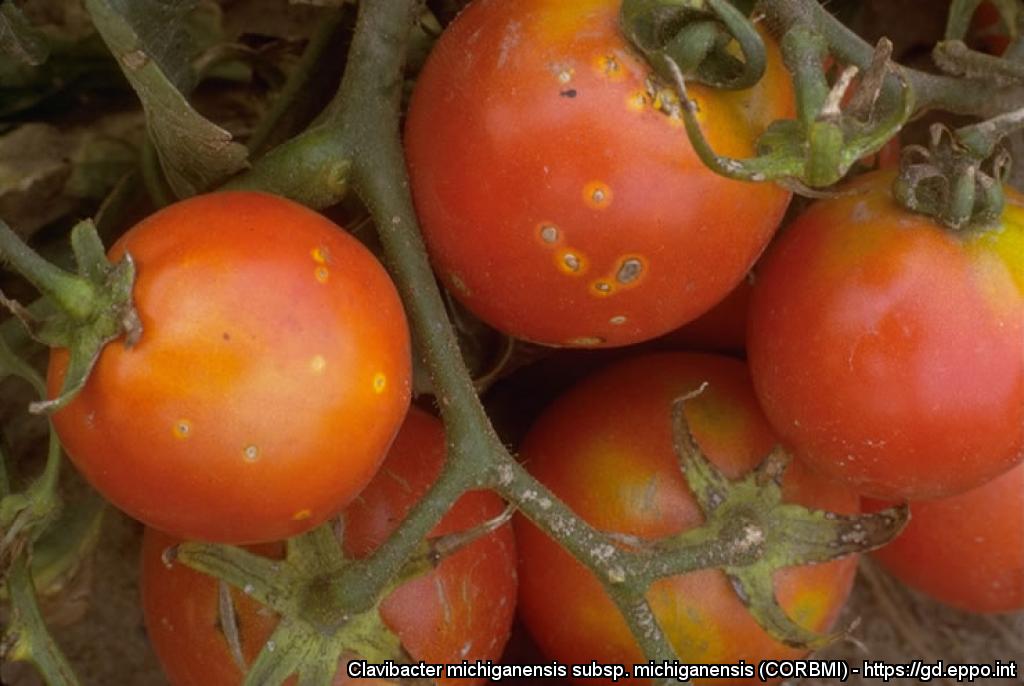 Know more about the experts involved

A Horizontal Expert Working Group (HEWG) was in charge of the drafting and finalization of the screening methodology. The HEWG was composed of a core group and an enlarged group:

The core-HEWG was limited to 6 experts. This group met two times during three full days and was responsible for preparing the draft-methodology. A method proposal prepared by the EPPO Secretariat served as a basis for discussion within the HEWG.

Following the core-HEWG, and in order to ensure a wider appropriate geographical coverage and a wider review, EPPO organized a face to face meeting of the enlarged-HEWG, where one expert per country which provided nominations was invited. The objective of this meeting was to agree upon and finalize the methodology. The enlarged HEWG included experts selected for the core group, plus other experts. 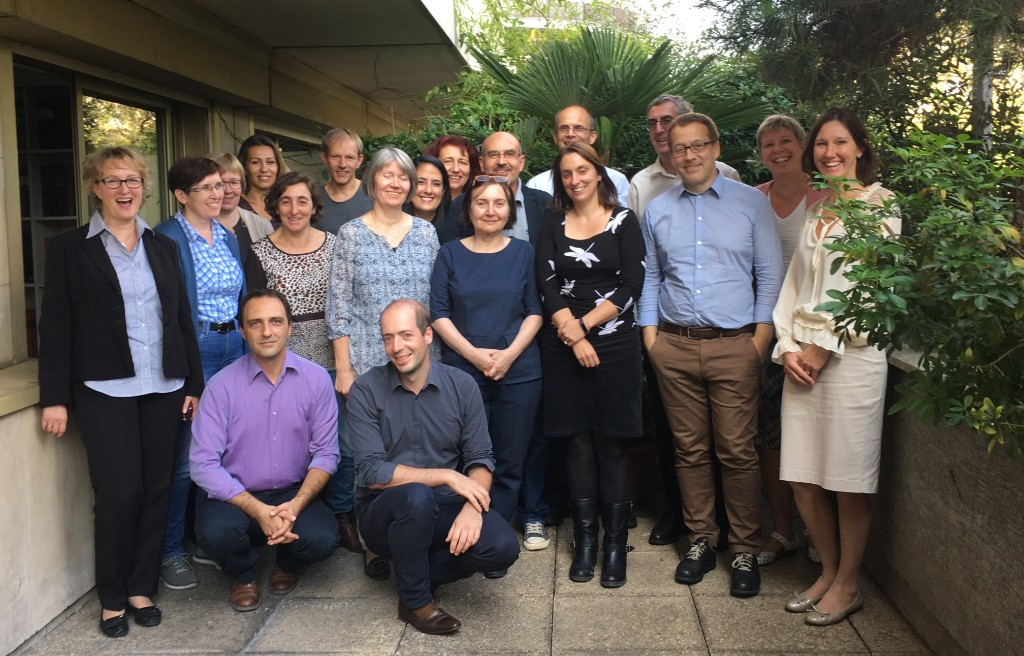 Sector Expert Working Groups (SEWGs) were in charge of the practical application of the methodology on specific pests. For the intensive work envisaged, the EPPO organized 6 different SEWGs. In each group, at least one expert from the HEWG was nominated to guarantee a good application of the methodology. SEWGs were defined for (in chronological order): 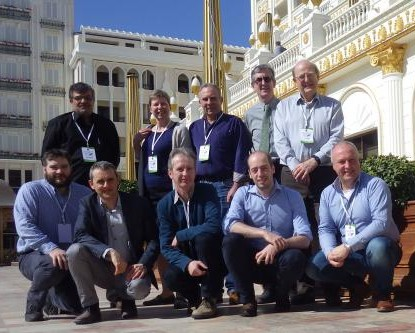 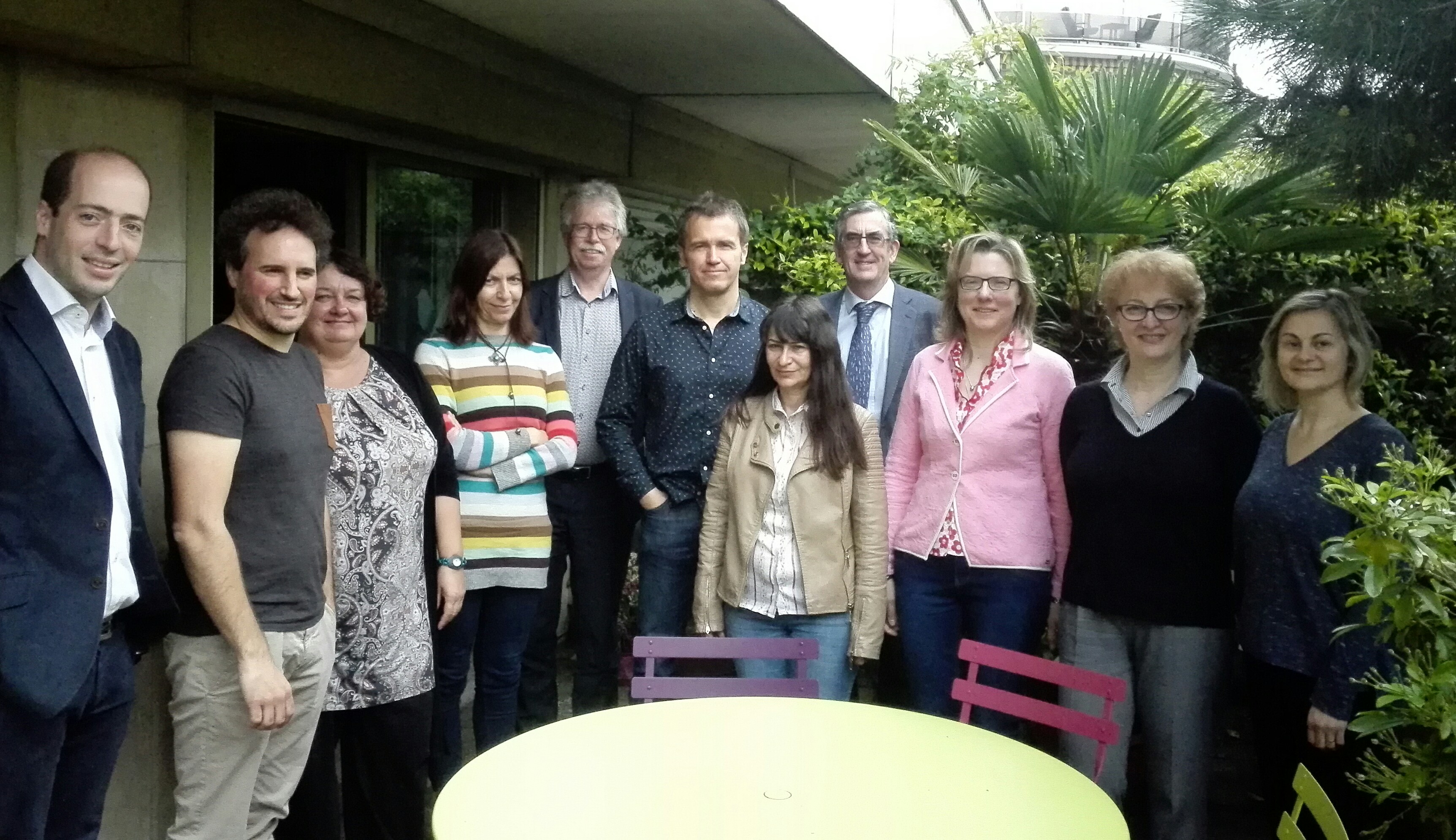 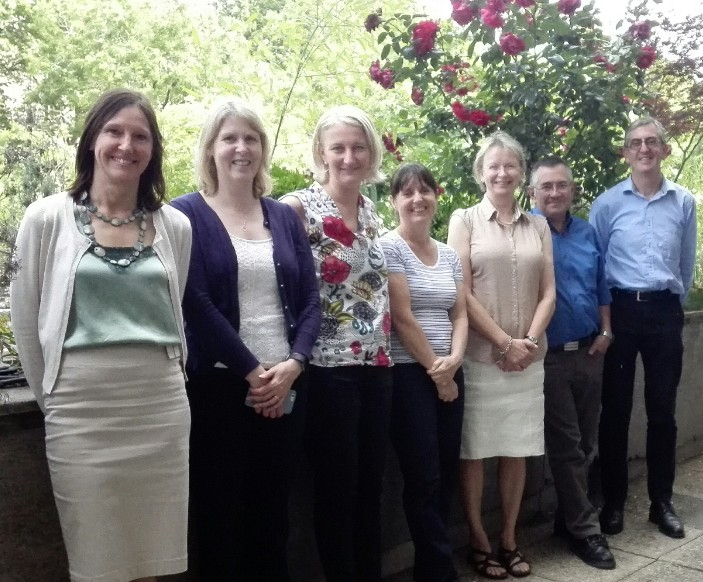 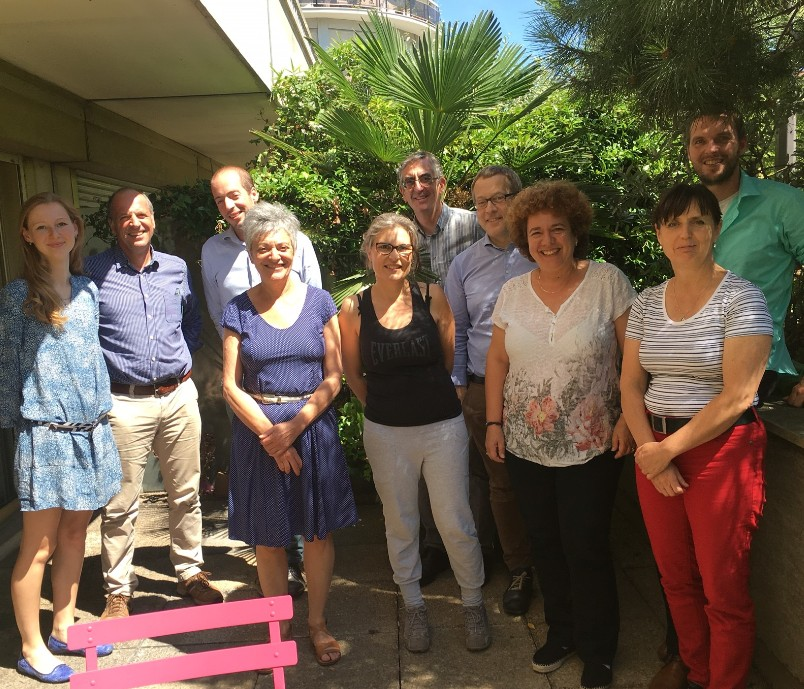 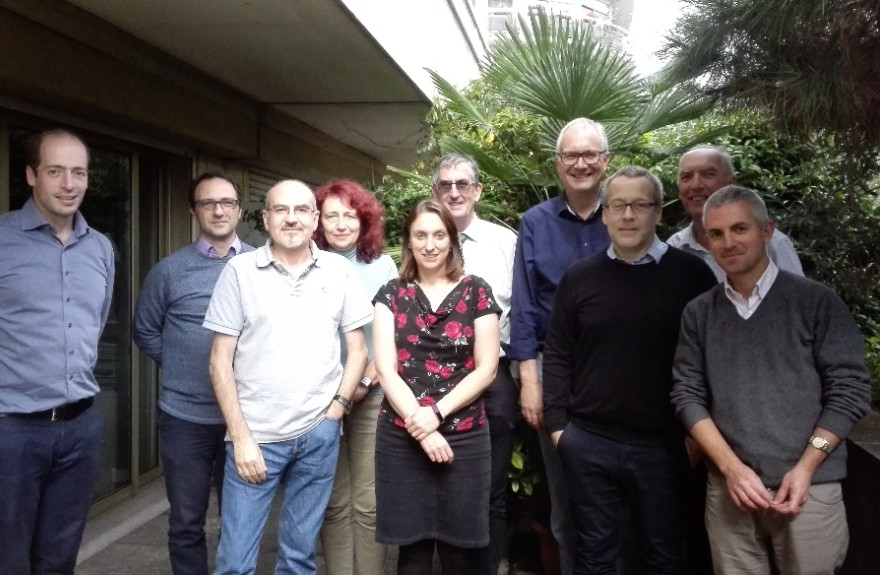